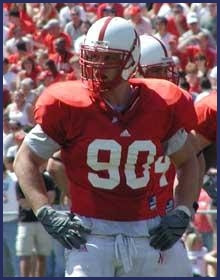 (On how it feels to be a Ram)
“It feels great; I could'n’t be more excited and thrilled. It is very exciting.”

(On interest from Rams)
“They sent a lot of decision makers to my pro-day, and when I went to visit they told me that if I was there at thirteen they would take me.”

(On interest from San Francisco 49ers)
“I did'n’t even visit San Francisco and I guess they were'n’t too interested for some reason.”

(On his versatility on the defensive line)
“There are a lot of guys in this draft that at game time they are just pass rushers, you have guys who are straight rush stoppers, but I can do both things. I am a big strong guy that can also run very well, I am pretty fast, I run a 4.72. I can do both of those things, I can rush the passer and I can stop the run, which means I can play defensive end, defensive tackle, or nose, wherever they want to put me.

(On starting as a Defensive Tackle)
“That sounds great to me, I could really use my speed and quickness inside there.”

(On being prepared to step in an play and any weaknesses)
“I would love to step in and play right away, that is definitely a goal. I plan on earning that spot, I know it is not going to be handed to me. As far as weaknesses I need to work on I would say, pad level because I play a little too high sometimes. I would say playing low is one of the main things.”

(On being known as a high motor player)
“It is a personality thing and an attitude. I hate losing. I am going to do everything I can to win. I am going to run down the field and chase the guy down, I am going to play as hard as I can on every play. I want to win.”

(On Nebraska’s defensive reputation)
“I grew up a Husker fan. I grew up watching Nebraska play every Saturday and watching the NFL every Sunday.”

(On pass rush skills)
“I am very good with my hands, a lot of guys don’t think I can beat them with speed, but I can get you with speed. I can also use my power, I am a strong guy.”

(On gaining weight to play inside)
“I talked with the coaches a little bit when I was there about my weight and they talked about getting me up to 310 or 315. If that is what they want, I can do that with no problem.”

(On run defense and where it comes from)
“Well it comes from Nebraska, we play the run first, react to the pass. Stopping the run, to our coaches, was by far was the number one thing.”

(On being sure the Rams were going to draft him)
“I definitely was excited when they told me that, but at the same time I’'ve heard of teams calling a guy up and saying,‘our pick next, we are going to take you,’ and then not taking him so I was excited but I did'n’t want to get too excited until it actually happened.”

(On who from the Rams was at his workout)
“The defensive coordinator, I recall the head coach, I believe there was the general manager but I can’t remember for sure. I just remember those two for sure.”

(On following the Rams organization)
“I follow them a little bit. I know they are a 4-3 team, they definitely want to play me a 3-technique maybe even look at me as a nose possibly. I just know a little bit about their defense.”

(On who was his position coach)
“Coach John Blake.”

(On Linehan talking about how they are from the same state)
“It did a little, it did come up. I’m actually in eastern Washington right now, at my parents’ house. I was just here for the draft and the draft party, so it did come up a little bit.”

(On the celebration)
“Yeah we'’ve got some food, some family, my high school coach, Coach Weiss, is here, my middle school coach, some of the neighbors, some people who have supported me and helped get me to this point, I wanted to spend this day with them.”

(If his friends and family “went nuts”)
“Yeah, as soon as the phone rang everyone turned and just stared at me. I looked at the clock and there was about two minutes left on the clock and I was like, ‘oh this would be the perfect time for it to be them.’ Then when I told my dad I was talking to the owner everyone just erupted.”

(On how he knew it was'n’t a telephone salesman)
“I would have had a serious problem if it would have been.”

(On knowing Grant Wistrom)
“I have never met Grant. He has been to Nebraska but when he came back to visit I never had the chance to meet him.”

Posted by lovemyrams at 9:18 AM No comments:

Scott Linehan Gets His Man 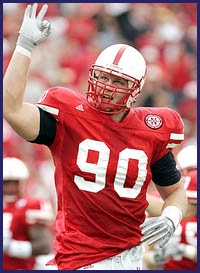 Of the players possibly available at No. 13 overall, Carriker appealed to him most. Although he played defensive end for the Cornhuskers, Linehan expects him to play defensive tackle and possibly nose tackle for the Rams.

“I tried to keep this somewhat of a secret; he was the guy I was hoping would be there,” Linehan said. “I thought it was be 50-50 if he would be there. There were two other teams that showed quite a bit of interest in him.”

Carriker confirmed the Rams’ interest. “They told me they would take me at 13 if I was there,” Carriker said. “I couldn’t be more excited or thrilled.”

He is listed at 6-foot-6 and 300 pounds. Carriker noted that he wasn’t a pure pass rushing defensive end or a pure run-stopping interior lineman.

Linehan loves his versatility. “In a crunch, he could probably play every position for us on the defensive line,” he said. “The great thing about Adam is he fills a lot of categories for us.”

The Rams expect Carriker to add another 10 to 15 pounds before training camp. Linehan rates run stopping as his biggest strength.


Posted by lovemyrams at 9:06 AM No comments: 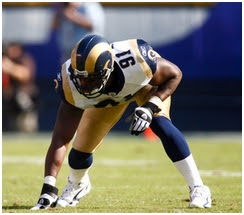 After spending the past few seasons attempting to find a permanent starter to line up opposite Leonard Little, the Rams hope they found their answer in the offseason when they traded for Detroit’s James Hall.

When the Rams sent a fifth-round choice to the Lions for Hall, they immediately plugged him in as the possible starter next to Little. While Hall has battled injury issues, he has proved to be talented and capable when healthy.

If nothing else, Hall instantly improves the team’s depth at a position that has sorely needed it in the past few years. Of course, the Rams could have been in serious trouble at the position had they not made the move to re-sign Little to an extension in the middle of last season.

Little rewarded the team with one of his best seasons, racking up 12 sacks and continuing to be one of the league’s best pass rushers. But aside from Little’s performance, the team got little in the way of a pass rusher from the end spot.

In fact, the rest of the ends on the roster combined for just 2.5 sacks. Last year’s original starter Anthony Hargrove was shipped to Buffalo for a fifth-round pick early in the season. Rookie Victor Adeyanju showed promise, particularly against the run, but was slowed by an injury. And Brandon Green and Eric Moore were unable to provide a consistent pass rush.

For now, it appears Little, Adeyanju and Hall will definitely be in the mix next season, but the Rams would be well served to find another young, pass rusher for the rotation. When Little signed his contract extension, he made it clear he would likely be his final NFL contract.

So finding an end in the NFL Draft could serve the dual purpose of boosting the pass rush immediately and providing the Rams with a long term replacement for Little. Fortunately for the Rams, this year’s draft is loaded with talented pass rushers. There are as many as seven potential first round ends on the board and plenty more that should be available on the first day.

While the Rams need the most help at defensive tackle and would likely look to fill that void first, but if the top players there are gone, it’s conceivable the team could look to bolster the pass rush with the No. 13 overall pick.

Leading that group is Clemson’s Gaines Adams. Adams is a dominant pass rusher with tremendous speed and isn’t likely to make it out of the top 10. Behind Adams is a group that includes Arkansas’ Jamaal Anderson, Nebraska’s Adam Carriker, Florida’s Jarvis Moss, Purdue’s Anthony Spencer and Georgia’s Charles Johnson.

It’s possible that any or all of those names could be available to the Rams when they choose in the first round. The Rams have definite interest in Anderson and Carriker and either would make a lot of sense as a three-down end in the Rams’ 4-3 scheme.

Players such as Moss and Johnson are considered ‘tweeners, but Little was once a ‘tweener too and now he’s one of the league’s best pass rushers.

Should the team eschew grabbing an end in the first round, there are plenty of possibilities later in the draft. Texas’ Tim Crowder and Brian Robison along with Ikaika Alama-Francis would make sense late on the first day or early on the second.

One way or another, expect the Rams to bring on at least one more end to provide some depth and a future for the position.

1. Gaines Adams, Clemson – The best pure pass rusher in the draft. Adams has speed to burn off the edge and all of the necessary moves to get by any tackle.

2. Jamaal Anderson, Arkansas – A better all-around end than Gaines, Anderson is bigger and stronger, but doesn’t rush the passer quite as well as Adams.

3. Adam Carriker, Nebraska – A huge, tough guy with the ability to play end or tackle in any defense. Carriker is terrific against the run and solid as a pass rusher.

4. Jarvis Moss, Florida – Another pure pass rusher in the mold of DeMarcus Ware. Could be a 3-4 linebacker or a speedy pass rusher who gets bigger in time a la Leonard Little.

5. Anthony Spencer, Purdue – Another strong pass rusher, who isn’t as bad against the run as some would like to believe.

Sleeper: Ikaika Alama-Francis, Hawaii – Maybe because he played at Hawaii, Alama-Francis was overlooked for most of his college career. But he has the ability to step in and make an impact sooner than later as a solid three-down end.

Posted by lovemyrams at 7:09 AM No comments: