by the Bleacher Report

The St. Louis Rams came into the 2012 NFL draft with a combined 15-65 record over the past five seasons and without a playoff appearance since 2004. New head coach Jeff Fisher and general manager Les Snead didn't create the woes of brutal football in St. Louis, but they sure did inherit it from the likes of Steve Spagnuolo, Billy Devaney, Scott Linehan and Jay Zygmunt.
Levelheaded fans and pundits knew it would take Fisher and Snead some time to rebuild the Rams franchise back into a winner. This was not a overnight fix. This wasn't a one-draft solution. Calling it a challenge would be an understatement.
However, the process has potential to be sped up much quicker than could of been expected.
In one draft, the Rams just may have gone from a joke of the NFL, a team with a 2-14 record last season, to a borderline playoff contender. Fisher and Snead were able to trade down and accumulate much-needed extra picks while still nabbing guys they claimed to have their eyes on.

14. Michael Brockers, DT, LSU
My first thought when the St. Louis Rams drafted LSU defensive tackle Michael Brockers at No. 14? Poor Sam Bradford. My rethought after seeing how the second and third rounds played out? Wow, the Rams have an amazing defense now.
St. Louis selecting Brockers sets him up to join a young defensive line with Chris Long, Robert Quinn and Kendall Langford. That's a pretty nasty line after the Rams ranked 31st in run defense, allowing 152.1 rushing yards per game in 2011.
The addition of Brockers makes the Rams young and talented on the defensive line. Brockers and Langford are run-stuffers that will allow Long and Quinn to attack the opposing quarterback, and Brockers specifically ran open the interior to allow linebacker James Lauranitis to more effectively engage the ball carrier.
When you have the defensive line the Rams now possess, coupled with the talented playmakers in the secondary on the team, good things happen.

33. Brian Quick, WR, Appalachian State
Personally, I really like the Appalachian State wide receiver Brian Quick. But not at No. 33. If the Rams want a guy and reach a little to go up and get that player, there should be no problem with it. However, this was a big reach. Quick probably would have been there when the Rams picked at No. 39 or No. 50.
He's a raw, young receiver that may not translate to a big-time NFL impact player right away, but he could develop into one. If the Rams played their hand correctly, Quick will develop as a deep threat for Sam Bradford sooner rather than later. Yahoo! Sports'Michael Silver compared Quick to NFL great Terrell Owens.
The development of Quick is of great importance to the development of Bradford and the Rams organization. He has tremendous upside with a high ceiling.

39. Janoris Jenkins, CB, North Alabama
This is probably my favorite pick of the draft for the Rams. Draft ratings are essentially useless at this stage of the game, but if I was forced to give this pick one it would be a solid "A."
Jenkins would have been in the debate with Morris Claiborne of which cornerback should go first in the draft, if not for his off-the-field issues. The Rams need to hit on their draft picks, but a player with his skill set is simply too tough to pass up in the second round when a team has three early picks. He will also be an effective punt returner, allowing Danny Amendola to focus on just being a receiver.
The North Alabama corner has been compared to troubled NFL star Adam "Pacman" Jones and has even been questioned about the comparisons in interviews. Fisher failed in keeping Jones out of trouble, but Jenkins is not Jones. Pacman was a violent offender. Jenkins likes marijuana.
Fisher and Snead have stated they have a plan to keep Jenkins out of trouble. If they succeed, this could be the steal of the draft.

50. Isaiah Pead, RB, Cincinnati
One of the major goals of the 2012 offseason and draft for the Rams was upgrading the lowly offensive play we've come to expect. Getting a change-of-pace running back, who could be the heir apparent to Steven Jackson, does just that.
The change-of-pace running back is important to any dynamic offense and is something the Rams haven't had for quite some time. However, running back isn't an essential need with Jackson still on the team and so many other needs still needing to to addressed here.
Getting a quality outside linebacker should have been the priority late in the second round. Zach Brown and Lavonte David were still on the board and would have been better picks given that the Rams only had four linebackers (one quality) at that time.
If the Rams were set on running back here, though, why not LaMichael James or Lamar Miller?
The Rams already had some talented cornerbacks at this pick in Cortland Finnegan, Jerome Murphy, Darian Stewart and Jenkins. Yet Johnson proved too difficult to pass up.
Johnson was another first-round talent player who the Rams snagged later in the draft. He has great size and is a very physical player—the kind of DB Fisher likes. He will stay at corner, according to the head coach, but his skill set may force the Rams to switch him to safety to get him more playing time in an already talented group.

Final Thoughts
The Rams had a great draft. In addition to the picks above, St. Louis found a talented, quick receiver in Chris Givens later in the draft than he was projected to go and a kicker to replace Josh Brown's large salary.
Am I saying the Rams had a perfect draft? No.
Did it play out how I wanted it or expected it too? Absolutely not.
Are the Rams ready to battle it out all season with the San Francisco 49ers for first place in the NFC West? Probably not.
Yet, the Rams are closer to being a serious threat in the NFL than they have been in quite some time. Not a 2010 fluke that battled for a playoff spot till the end with a 7-9 record, but a consistent contender to make the playoffs year after year.
With offseason moves and the 2012 NFL draft, Jeff Fisher is already heading towards what he promised when he joined the Rams.
"The Rams won't be picking at No. 2 again next year."

Posted by lovemyrams at 10:37 AM No comments: 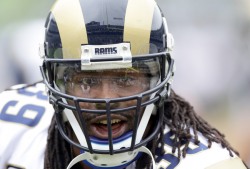 In a Friday appearance on ESPN’s NFL Live, veteran Rams running back Steven Jacksonmade clear his preferences for the team on draft day, if he were in the team’s war room.
“I’m standing on the table for a receiver,” Jackson said.  “Arguably it might be [Justin] Blackmon out of Oklahoma State.  Big target, a guy that has a lot of good body control, he can make the big play happen.  We have a good receiver in the slot in Danny Amendola, so we just need a complement to Danny, give Sam [Bradford] some options as well, and open some room for me in the running game.”
It’s no surprise that Jackson wouldn’t lobby for his replacement, even though coach Jeff Fisher has been singing the praises of Trent Richardson.  Coincidentally, the Rams used a first-round pick on Jackson while the Rams still had Marshall Faulk, and it wasn’t long before Faulk was gone.
We’ll find out in 13 days whether Jackson gets his wish for the team to take a receiver with the sixth overall pick in round one, instead of Jackson’s eventual successor.
Posted by lovemyrams at 11:42 AM No comments: