St. Louis Rams got their guy Friday when Jeff Fisher agreed to choosing the NFC West cellar-dwellers over South Beach and the Miami Dolphins.

A footnote throughout the courtship of Fisher has been the fact that Rams executive vice president of football operations and COO Kevin Demoff is the son of the coach's agent, Marvin Demoff.

Sports Illustrated reported Monday that some in the league believe there could have been possible collusion on the part of Fisher and the Demoffs. Fisher denied the claims, saying his agent had no influence on his decision to go to St. Louis.

"Under no circumstances at any time," Fisher said. "I have 100 percent conviction on that. This was my decision, and Marvin assisted me. I was the one who decided. No one pushed me anywhere."

Fisher was the top head-coaching candidate of both the Rams and Dolphins, and NFL Network insider Jason La Canfora that numerous league sources expected the former Tennessee Titans coach to choose St. Louis. Fisher explained the process of how he settled on the Rams.

"From (Day 1), when I began this process after the season, I felt Miami and St. Louis were my best options," Fisher said. "I did my research. I looked at every team that had an opening. I looked at the personnel on each team, I looked at the owners, I looked at the cap situations, and I narrowed it to two. Not Marvin. Me. Marvin didn't push me. I am convinced he was completely objective."
Posted by lovemyrams at 1:52 PM 1 comment:

Rams lose; future for Spags, Devaney up in the air 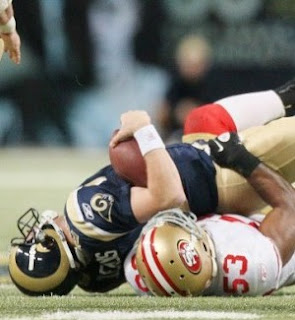 It's over for the Rams in 2011. Is it now over for coach Steve Spagnuolo and general manager Billy Devaney following Sunday's 34-27 loss to San Francisco? Initial indications were that a decision would be made quickly, probably on Monday, according to league sources.


Team sources tell the Post-Dispatch that the Rams have made no decision at this time on whether to fire Spagnuolo and Devaney. ESPN reported that they've been fired.


The Rams made things interesting, with two fourth-quarter touchdowns to narrow their deficit from 34-13 to 34-27. But that's as close as they got as San Francisco ran out the clock in the final 2½ minutes to play in the Edward Jones Dome.


The Rams finish their season at 2-14, tied for the second-worst since the move to St. Louis in 1995. By virtue of Jacksonville's 19-13 victory over Indianapolis, the Rams will pick No. 2 overall with the Colts having the first pick. Indy also finished 2-14, but because the Colts played a weaker schedule than St. Louis, they get the No. 1 pick on the tie-breaker.


Meanwhile, San Francisco marches into the offseason with a 13-3 record and a first-round bye as the No. 2 seed in the NFC.


Things started out promisingly enough, with quarterback Kellen Clemens doing his Cam Newton impression on an 18-yard scramble for a touchdown. Clemens was starting his third consecutive game with both Sam Bradford (ankle) and A.J. Feeley (thumb) sidelined again with injuries.
On third-and-7, Clemens scrambled to his right and dove past 49ers safety Donte Whitner for the final couple of yards into the end zone. The 62-yard drive followed a rare miss by San Francisco's field goal machine, kicker David Akers.


It marked only the second time all season the Rams had scored a TD on their opening drive of a game. The only other time it happened? Steven Jackson on the Rams' first offensive play of the season _ a 47-yard TD run against Philadelphia.


But it was all 49ers in the first half after what was the third rushing TD of Clemens' six-year NFL career. The 49ers picked up lots of field position on special teams, due mainly to the work of their Pro Bowl punter, Andy Lee. On the possession following the Clemens TD, a 66-yard punt by Lee bounced out of bounds at the St. Louis 8. The Rams went three-and-out, and when a 38-yard punt by the Rams' Donnie Jones was returned 10 yards by Reggie Smith, the 49ers took over on the St. Louis 33 late in the third quarter.


Five plays later, on third-and-goal from the Rams 8, San Francisco quarterback Alex Smith matched his Rams counterpart by scrambling to his right for a game-tying touchdown with 37 seconds left in the opening quarter. Defensive end Chris Long missed a potential sack at the start of the play.


On the Rams' next possession, offensive coordinator Josh McDaniels reached into his bag of tricks, but this one backfired like an exploding cigar. On third-and-3 from the St. Louis 39, running back Jerious Norwood took a direct snap and started to his right before stopping to lob a pass back across the grain for quarterback Clemens.


But the ball seemed to float forever, and 49ers cornerback Tarell Brown swooped in for an interception and return to the St. Louis 34. Alex Smith then tried two quick throws, or "smokes," to wide receiver Michael Crabtree. The first, to Smith's left, was relatively well defended and went for six yards. On the second, to Smith's right, cornerback Josh Gordy missed a tackle near the line of scrimmage and Crabtree raced down the sideline for a 28-yard TD and a 14-7 San Francisco lead.


The 49ers, who outgained the Rams 113 yards to 34 in the second quarter, tacked on a couple of Akers field goals for a 20-7 halftime lead.


The Rams added a Josh Brown field goal in the third quarter to cut the San Francisco lead to 20-10. But 49ers coach Jim Harbaugh went one better later in the quarter on a fake field goal. Akers took the snap and threw to a wide open Crabtree for a 14-yard TD and 27-10 lead with 55 seconds left in the third quarter.


Crabtree faked as if leaving the field, but never did; he lined up just inside the out-of-bounds line on the sideline with no Rams player following him over. It was just the latest meltdown by special teams coordinator Tom McMahon's unit over the second half of the season.


The Rams added a second Brown field goal early in the fourth quarter, but the 49ers kept answering the field goals with touchdowns. Anthony Dixon scored from one yard out with 6:30 to play to stretch the San Francisco lead to 34-13.
Posted by lovemyrams at 8:44 AM 1 comment: