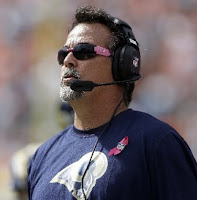 Even after watching game film Monday, the Rams' 17-14 defeat in Miami had to be one of those deals in which the head coach scratches his head and wonders out loud: How did we lose this one?
And that kind of loss is tough to take.
"Yeah, it is," Jeff Fisher said. "The numbers — the statistics — reflect a well-played game on both sides of the ball. But you have to be very careful to walk down the hall thinking that things are OK because the statistics were so skewed in our favor."
Boy, were they skewed. The Rams' 462 yards of offense marked their highest single-game output since a 37-31 overtime victory over Washington on Christmas Eve 2006. The Rams piled up 579 yards in that contest.
The Rams' 294 yards in the first half against the Dolphins was the ninth-highest first-half total in the franchise's 75-year history.
On the defensive side of the ball, the Rams allowed only 19 yards rushing to the Dolphins, the lowest total since the move to St. Louis in 1995. Additionally, the 192 total yards allowed tied for eighth-lowest in the franchise's 18 seasons here.
On Monday, Fisher had a distinct idea of how and where things went awry in south Florida.
"When you lose a close game — by a field goal — there's little things that contribute," Fisher said. "And there were some little things. But to me there was also a big thing that contributed to this loss — and that was the second quarter.
"In the second quarter, we had seven penalties, missed two field goals and turned the ball (over) inside our opponent's territory on the 25-yard line."
Plus there was a busted coverage by rookie cornerback Janoris Jenkins that resulted in Miami's first touchdown.
"At the end of the day we let things slip in the second quarter, and then we just couldn't make the plays in the second half to regain it," Fisher said. "When you're playing a close game, you don't guess on a route, and that's what happened with 'Jenks.' Sometimes he guesses right, but he thought he saw something, and the guy ran right by him."
The result was a 29-yard touchdown catch by Marlon Moore, giving Miami a 7-6 lead — a lead the Dolphins never relinquished.
"When you put together a great defensive effort you say: How could we have done better?" Fisher said. "Well, that's certainly how you do better. You don't give up a long ball like that. I'm not singling him out per se, but in close games you can't allow those things to happen."
Fisher provided another example on offense — wide receiver Brandon Gibson played one of his best games as a Ram.
"It's hard to find a better catch than that catch in that last drive, and a couple of the other catches that he made," Fisher said. "But he double-catches one and he should get his feet (in bounds), in (Miami) territory. So he's had a great game, but what if we would've made that catch? Would things be different down there?"
Gibson's bobble came inside the Miami 20 and would've given the Rams a first down on their first drive of the game. Instead, they settled for a Greg Zuerlein field goal.
"So there's your definition of how you lose close games," Fisher said. "You have a lot of little things add up."
Even with the Rams' dominance on offense and defense, the loss to Miami also illustrates the importance of special teams play.
That unit had been very consistent in the first five games but was a big liability against Miami. Besides the three missed field goals by Zuerlein, the Rams committed the day's only turnover — on a fumbled kickoff return by Brit Miller.
"You get up in the traffic, put both hands on it and go down," Fisher said. "You see it (happen) that way too often, guys that aren't used to handling balls need to get down."
Jenkins, taking over on punt returns for the injured Danny Amendola, fumbled his first return out of bounds, costing the Rams field position by pinning them back at their 8.
"We got outplayed on special teams," long snapper Jake McQuaide said. "I think that's gonna be pretty evident."
To start the second half, Marcus Thigpen got loose for a 44-yard kickoff return, giving Miami good field position on its second TD drive.
"We had a guy in the wrong position," Fisher said.
And there was one more glaring special teams problem late in the game. On a fourth-and-1 play from the Miami 40 with 3½ minutes to play, the Dolphins lined up in punt formation. But up-back Chris Clemons took the snap and ran 3 yards for a first down.
The Rams eventually got the ball back, but the successful fake allowed the Dolphins to chew up 1½ minutes of time and forced the Rams to burn their second timeout.
"That's on me," Fisher said. "I didn't think that they would do that, or I would've left the defense out there."
Instead of keeping the starting defense on the field, the Rams had their punt return unit on the field for what turned out to be the fake on a successful gamble by Dolphins head coach Joe Philbin.
Posted by lovemyrams at 7:59 AM 1 comment:

The Rams certainly won’t get any style points. Perhaps much of the national television audience called it a night early or flipped over to a reality show. But in this long-forsaken football outpost, there was nothing but joy Thursday night in downtown St. Louis.
Football has returned to St. Louis after a long absence. Winning football, that is. For the first time since Nov. 4, 2006 when Scott Linehan’s inaugural squad had a 4-3 record, the Rams are above .500 after beating previously unbeaten Arizona 17-3 Thursday at the Edward Jones Dome.
It was the Rams’ first home victory over the Cardinals (4-1) since 2004. At 3-2, the Rams are just a game out of the division lead in the NFL’s new black-and-blue division, the NFC West. These two teams pounded at each other all night long before a spirited, towel-waving crowd.
The Rams made pulp out of Cardinals quarterback Kevin Kolb, but the blitzing Big Red didn’t exactly treat Sam Bradford with kid gloves. There were so many injured players helped off the arena floor it looked like an episode of Spartacus.
"It was a great effort," coach Jeff Fisher said. "The team had a sense for what we had to do going into this game because of the respect factor for their defense. Their defense is really, really talented. So we knew it was going to be a hard day offensively, so the defense had to step up and they did."
They stepped up to the tune of nine sacks and great red zone play.
"This defense is the heart and soul of this team right now," said rookie wide receiver Chris Givens, who gave the Rams some much-needed breathing room with a 51-yard touchdown reception from Bradford early in the fourth quarter. "We feed off their energy. You guys see how they go out there every snap, and play with passion and intensity."
Arizona got inside the Rams’ 20 on three occasions and got only a field goal to show for it.
On two other red zone forays, the Big Red were stopped on downs late in the fourth quarter, once on a sure tackle of Arizona wide receiver Larry Fitzgerald by rookie cornerback Janoris Jenkins on the 3 after a short completion with 5 minutes, 25 seconds to play.
And once on a sack by Cortland Finnegan on a corner blitz on fourth-and-1 from the St. Louis 13 with 2:09 to play.
But the Rams had to make one more defensive stand after getting the ball back from Arizona with 1:41 left. This time, defensive end Robert Quinn ended any suspense. His third sack of the game resulted in a fumble by Kolb with defensive lineman William Hayes falling on the football. After that, it was time for the victory formation kneel-downs after the Rams’ third home victory in as many tries.
"It’s nice to end the game on our first caused fumble and recovered fumble of the year," Fisher said. "God, I hope they keep coming."
The Rams’ defense entered the game second in the league with eight interceptions but did not even force a fumble — much less recover one — in their first four games.
Facing the league’s third-stingiest defense in terms of points allowed, the Rams knew they would have their work cut out for them scoring points. The Rams didn’t score an offensive touchdown four days before against a Seattle team ranked second in total defense. But it took them less than 2∏ minutes to do so against an Arizona defense that had yielded only four TDs this season entering Thursday’s contest.
The big play on the drive was a 44-yard pass from quarterback Bradford to Danny Amendola. Amendola did a great job of tracking the ball in the air while being interfered with by Cardinals cornerback Patrick Peterson on the play.
St. Louis declined the pass interference penalty, taking the play and a first down at the Arizona 11. On third-and-6 from the 7, Bradford fired a strike to tight end Lance Kendricks in the end zone. Greg Zuerlein’s extra point gave St. Louis a 7-0 with 12:39 left in the first quarter after what was Kendricks’ first NFL touchdown. Keep in mind, Arizona entered the game second in the league in red zone defense, allowing only three TDs in the red zone in its first four games.
After an Arizona field goal, the Rams and Cardinals played the field position game. But a 14-yard punt return by Amendola to the 50 followed by two runs for 15 yards by Steven Jackson advanced the ball to the Arizona 35. And that’s all the room the Rams needed for a 53-yard field goal by "The Leg." Zuerlein’s 13th consecutive field goal gave the Rams a 10-3 lead with 10:45 to go in the first half.
Midway through the second quarter, the Rams suffered a couple of costly injuries. On a play in which he almost made a spectacular 22-yard catch on a fade pattern from Bradford, Amendola suffered a shoulder injury landing on the turf. The play originally was ruled a catch, but Arizona was successful on an instant replay challenge on third-and-5 at the St. Louis 9. Amendola did not return.
After a 19-yard return by Peterson following a Johnny Hekker punt, Arizona took over at midfield. And on the first play of that Big Red drive, Rams strong safety Quintin Mikell suffered a head injury making a tackle. Mikell had been playing some of his best football since joining the Rams in 2011. He was replaced by Darian Stewart and did not return.
Posted by lovemyrams at 11:43 AM No comments:

Extra Points about the Rams' 19-13 win over the Seahawks: