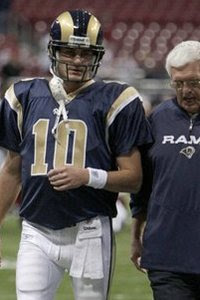 In a move that comes as no surprise yet nevertheless feels surprising (if that makes any sense and it probably doesn't), Howard Balzer reports via Twitter that Rams quarterback Marc Bulger has cleaned out his locker.

Bulger, a former West Virginia quarterback who attended the same high school as Dan Marino, entered the league in 2000 as a sixth-round pick of the Saints. He ultimately landed with the Rams, where he rose to prominence as the successor to Kurt Warner.

But once Bulger cashed in with a big contract, his passer rating plunged from the 90s to the 70s. Three seasons later, the Rams simply can't justify paying Bulger $8.5 million in 2010, given that neither G.M. Billy Devaney nor coach Steve Spagnuolo had any role in acquiring Bulger or financially rewarding him.

So if Bulger is released before March 5, he'll hit the free-agent market before the market officially opens, giving agent Tom Condon plenty of time to find a new home for him.

How about a reunion with former Rams coach Mike Martz in Chicago? As Martz learned in 1999, the guy at the top of the depth chart in August might not be the guy who's holding the Lombardi Trophy at the end of the season. So if Jay Cutler takes a helmet to the knee in the preseason, the Bears will need someone other than whoever it is that backs up Cutler.

And that should be good for about 20 e-mails telling us who it is, and one or two identifying the number Ike Hilliard wore in Tampa. (Only founding members of PFT Planet will get that one.)

Take this news for what it's worth - which is potentially nothing - St. Louis Rams QB Marc Bulger has cleaned out his locker at Rams Park.

There's a pretty big gulf between cleaning out your locker and being outright released by the team. However, many expect the Rams to part ways with Bulger this offseason. I don't believe there are any sort of roster bonus due in Bulger's contract, which means there is no extra incentive for the Rams to release Bulger prior to the March 5 whistle for free agency. I suspect, as the PFT link alludes, that it might be more of a courtesy similar to what the team did in releasing Torry Holt and Orlando Pace earlier than necessary last season that gives Bulger more time to find a new team.

I still would not rule out the possibility of the Rams having some interest in bringing Bulger back at a reduced rate and not handing him the starting job. With free agency what it is in these no-cap times, finding a QB is no easy task, and cutting Bulger leaves the Rams with just one QB on the roster: 2009 sixth round pick Keith Null.

Now this is really getting into tea leaf reading, but I think if the Rams don't bring Bulger back it makes drafting a QB more likely, a first round QB that is. Even if the Rams do follow the rumors and chase Michael Vick and his sub-60 percent career completion percentage, he's not a long-term solution or even a guarantee to start in 2010. Mostly, I think it's just an issue of need. Without Bulger, you've got Null and maybe Vick, two relative unknowns and probably not the answers for the future. A first round QB is a much better candidate to step into the fold should Vick or Null keep the Rams from being as competitive as possible.

Either way, keep an eye on the Bulger situation, locker cleanups don't necessarily mean anything in and of themselves. Maybe he just needs an extra bottle of Head and Shoulders for home?

Posted by lovemyrams at 7:31 AM No comments:

I think we're closer than most or our critics think...

The glass always is half full with Rams owner Chip Rosenbloom. That's his
personality and the way he goes through life. It's not surprising then, that
Rosenbloom is optimistic about the future of the team. He hopes Rams fans share
that view.

"I think fans should be optimistic about the direction of this organization,"
Rosenbloom told the Post-Dispatch in a rare interview. "We made a sweeping
restructuring of the entire organization so that we could be winners on the
field — to put us in position to start winning games.

"Now, this is not a one-season fix. This past season was sort of an interim
year in my opinion before we see a more successful on-field product. I think
this year it was necessary to get through a lot of stuff."

Over the past year or so, the Rams underwent an organizational shakeup from top
to bottom, one that was unprecedented since the franchise moved to St. Louis in
1995. It included sweeping changes in upper management, the front office and
personnel department, the coaching staff and more.

The roster itself was purged of many veterans. Financially, that meant the Rams
led the league in 2009 in dead money — money that counts against the salary cap
for players no longer on the team. In terms of salary-cap room, the Rams will
be in much better shape entering this offseason (although it looks like 2010
will be an uncapped year).

"There are still a handful of pieces needed to make this thing really work,"
Rosenbloom said. "So I'm optimistic. I think if we'd sat back and done nothing,
that fans would have a right to be upset. I don't think we've done nothing."

That may be true, but they sure didn't win. The 1-15 record was the worst in
franchise history.

"Clearly we were disappointed," Rosenbloom said. "Clearly to lose 15 games,
there's no excuse for it. I think Coach (Steve) Spagnuolo and Billy (Devaney)
have said as much. We're a lot better than that."

Rosenbloom agreed to the interview reluctantly. He said in hiring Spagnuolo as
head coach and promoting Devaney to general manager, part of their job
description was to be the voices of the team — at least in terms of what's
happening on the field.

"We made a conscious decision to hire people who had a football background to
make football decisions," Rosenbloom said.

The biggest off-the-field issue surrounding the team is the pending sale of the
team. League sources told the Post-Dispatch recently that the sale probably
will be completed before the NFL draft, which is in April — provided Rosenbloom
and sister Lucia Rodriguez decide to sell the team. And contrary to recent
reports, there still are three bidders involved in the potential purchase of
the team, all of whom have offers that are "acceptable" to Rosenbloom and
Rodriguez.

But Rosenbloom declined to talk about the potential sale.

"There are confidentiality agreements regarding prospective bidders,"
Rosenbloom said. "And so I'm not going to discuss it. We're running a football
team."

It's a football team that most observers feel needs more than "a handful of
pieces" to become competitive. But Rosenbloom disagrees with that sentiment.

"I think we are closer than most of our critics think we are," he said. "People
that really understand the game know that with a handful of pieces in place
we're a highly competitive team."

This past season, Rosenbloom added, "We had six or seven games where within the
last five minutes of the game it was within one score. ... I think Steve came
in and did a really good job. Again, the victories don't reflect it. But this
was a rebuilding year.

"Steve is an absolute winner. There's no doubt in my mind. When all the pieces
are in place, he has all the tools to become a great coach. He's got what it
takes, and I've been around long enough to know."

Although Rosenbloom just completed only his second year as Rams owner, he has
been around football all his life. His late mother (Georgia Frontiere) owned
the Rams from 1979 until her death in 2008, and his late father (Carroll
Rosenbloom) owned first the Baltimore Colts, and then the Rams from 1953-79.

Rosenbloom thought the Rams' defense showed improvement in '09, although he
realizes its play was inconsistent. But what about an offense that was the most
feeble in the league in terms of scoring?

He said it is difficult "when you go through three quarterbacks and get your
quarterbacks beaten up'' and that it's difficult "when only one wide receiver
who was in training camp actually finishes the season. And with all the
injuries, of course it's going to be tough to score in those situations."

Rosenbloom said he liked the working relationship and the performance of the
team's power trio of Spagnuolo, Devaney and executive vice president of
football operations Kevin Demoff.

"I think Billy did a very good job," Rosenbloom said. "Think about historically
where we've been with these drafts. Time will tell on the more recent drafts.
But Billy has done a very good job on restructuring the football side."

While unwilling to overtly criticize past players, or past team executives,
Rosenbloom noted that the Rams haven't had disaster drafts under Devaney, as
has been the case in the recent past.

"There is an upward trend to this team, not a downward trend, with football
people in charge in an organization that's trying to build a foundation,"
Rosenbloom said, noting that the organizational conflict of the past is gone.
"We have a harmonious organized franchise now that's moving in the same
direction. That's always better for producing a winning team."

So what would Rosenbloom do with the No. 1 overall pick in the draft?

"The way I was raised, my father said you always take the best player available
in almost any circumstance," Rosenbloom said. "Now I would say this: If you
have Peyton Manning on your team and the equivalent of John Elway is available,
you might not take him."

But in the case of the current Rams, there are next to no positions at which
the team can feel like it's set. Especially at quarterback, where the Rams
won't be passing on the next Elway if he were available in the 2010 draft pool.
And he's not.
Posted by lovemyrams at 2:38 PM No comments: