Atogwe hopes to be back after release from Rams

BY JIM THOMAS
Even with his release Friday by the Rams, safety Oshiomogho Atogwe says he hasn't closed the door on a possible return to the team.
"My agent and myself have established a really good negotiating relationship with them, so were we to do something again (with the Rams), I don't believe it'd be a difficult task," Atogwe told the Post-Dispatch. "Because there's no bad blood there. We should be able to get something done."
The only problem — for several years — has been agreeing on Atogwe's value in terms of a multi-year deal. Rather than pay an $8 million roster bonus that was due Atogwe on Monday, the Rams released the six-year veteran.
"It's disappointing to be back in this situation, again," Atogwe said. "Not being able to actually be set at this point in time in my career — it's disappointing."
The relative security of a long-term contract has proven frustratingly elusive for Atogwe, a third-round round pick out of Stanford in 2005.
"I'd say it's frustrating along the lines that I haven't been able to feel at home since my rookie contract," Atogwe said. "Where you say, OK this team wants me for the long haul, for the long term."
Atogwe was franchised following the 2008 season, then in a wrinkle of the uncapped year, reverted back to restricted free agency following the 2009 season. As for this offseason, there's no doubt that the current labor impasse between players and owners, and pending lockout, have caused teams to be more conservative financially.
"Yeah, it has been difficult," Atogwe said. "I think that's why it's very important for us to really get a CBA done, in place and secure, so that other guys won't have to go through a similar situation as myself. And that the teams can really move on in paying their bills and grow for the long term. But for me it's definitely frustrating. I'm thankful that I still have peace throughout this, knowing that it's going to work out the way it's supposed to."
Because he is a released player, Atogwe is free to sign with any team immediately. However, if there is no collective bargaining agreement by March 4, no veteran players — even released players such as Atogwe — can sign new contracts at that time.
So Atogwe has a 13-day window to shop the market, but he plans to wait until there's a new labor agreement before doing so.
"I would say I'm just going to take this time to let God speak to me and go from there," Atogwe said. "I am going to wait till the market opens and then go from there."
Besides the $8 million roster bonus, Atogwe was due a $3.5 million base salary with the Rams in 2011, meaning he would have been due $11.5 million total.
Atogwe, 29, has been a starter the past five seasons for the Rams and was the team's defensive captain in 2010 in voting done by his teammates. He was used more in the box in 2010, limiting his opportunities for interceptions but blitzing more than he had in the past.
"I believe that in the positions they put me in I continued to make plays, continued to help the defense be successful," Atogwe said. "And continued to do all the things that I believe are necessary to be a good player in this league and be a good teammate."
Atogwe had three interceptions and three forced fumbles in 2010. Since becoming a full-time starter in 2006, Atogwe has 43 combined forced fumbles and interceptions, the most in the NFL over that span.
Rams officials and coaches declined to comment on Atogwe's release, but general manager Billy Devaney said in a statement: "This is a decision we have made at this time with O.J. We will continue to explore all of our options at the safety position like we will with every other position on our football team."
For now, Atogwe plans to keep working out while hoping that a labor agreement comes sooner rather than later. He has one other item on his offseason agenda: a spring wedding. He's marrying Jill Singletary, the daughter of former San Francisco 49ers head coach Mike Singletary.
"I was hoping all this would be settled before then and I could focus on that," Atogwe said. "But that's life. You deal with it."
Posted by lovemyrams at 12:28 PM No comments:

Faulk is elected to Hall of Fame 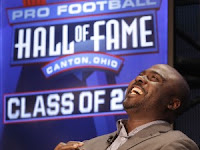 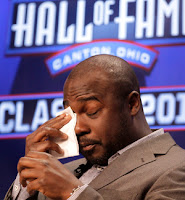 That they did. But only one Faulk.
Posted by lovemyrams at 6:09 AM No comments: