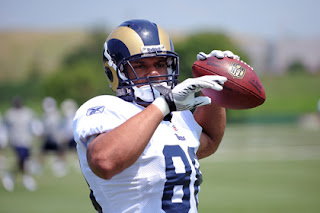 Rams are getting the knack of their new defense

Rams practices are meticulously taped, with no moment going unrecorded for review and inspection by the coaching staff. Coach Jeff Fisher's assessment of how well his defensive unit is picking up its new schemes isn't based on anything he's seen, whether live or later. It's based on what he hears.
"When you stand out and watch practice and everyone on defense is talking," he said Wednesday, "then everyone understands the defense."
There's a fair amount to learn for the Rams, who were 22nd in total defense last season — allowing an average of 358.4 yards per game — and 31st against the run, allowing 152.1 yards per game. That added up to them allowing the seventh-most points per game, 25.4, which was ample reason for a 2-14 season.
One of the main points of emphasis for Fisher in these organized team activities, or OTAs, was to install his offensive and defensive plans. On the defensive side, the effort seems to have gone smoothly and the players like a system built on thinking less, reacting more.
"We're going to be very aggressive," middle linebacker James Laurinaitis said. "There's a lot less thinking. There's still freedom to do things, but for the most part, it's simplified so you can play fast.
"There are multiple looks. You can do a lot of different things within those looks. You're repeating a lot of the fundamental ideas, but you're doing it with different looks so they don't know what you're doing. It allows you to just go."
"We're going to try to be disruptive and that's exciting," defensive end Chris Long said. "You get to let loose a little bit. It's a new thing, but in a way it's less thinking. The mind-set is more dictating the tempo of what we're doing."
The Rams are coming to the new defensive schemes from plenty of different places. The first unit on Wednesday had six players who weren't on the team last year, including top draft pick Michael Brockers, and who were going to get a new plan regardless of where they were. Then there are veterans such as Laurinaitis and Long, who have gone through enough coaching changes that learning a new defense is old hat.
"It's hard, though not necessarily as hard for a guy like me who's been through a couple systems," Long said. "But to scrap everything you know through repetition and start over can be tough. We're excited about it; it's a great system."
Laurinaitis, as the quarterback of the defense, has to know the specifics more than anyone. ("You don't want to be the guy making the mental error," he said.) While he still gets the playbook out to look at things, the OTAs have been a big help in letting him see those things at work. Meanwhile, he's doing mental translations in his head, knowing that what used to be X is now A.
The progress he has seen in the team's workouts has been in speed — not necessarily in how quick his teammates have picked it up but in how quickly they're playing on the field.
"The important thing when you put in a new defense is to make sure guys are still going fast and not thinking too much," he said. "Guys are still playing fast, which is good. The key now is just getting the final details down."
Those details will be sorted out in the practices ahead, in the upcoming minicamp and then in preseason camp.
"The veterans have done a real good job (picking it up)," Fisher said. "They're excited."
"We're still learning it," Long said. "It's a lot of volume, but as complex as it is, we've gotten a good start on it, and our guys are excited about it. When you're excited about it, it's easier to learn it. We're certainly working very hard to do so."
Rams notes
Second-round draft pick Isaiah Pead made his debut at Rams Park on Wednesday. Under NFL rules, Pead couldn't take part until final exams had ended at his school, Cincinnati, which runs later than most other schools.
• This is the last week of OTAs, with a three-day minicamp starting Tuesday. The team's veterans were given last week off while the rookies just lifted weights, and Fisher said that really helped as the youngsters closed the gap on the more experienced players. While the team can have four days of workouts this week, Fisher said he thinks four straight days is too much at this time of year, so the players have today off and will return Friday for a final session.
• Missing from workouts were tackle Jason Smith and free agent center Scott Wells. Fisher said they had the day off. Wells has also been absent from previous sessions.

Posted by lovemyrams at 2:48 PM No comments: